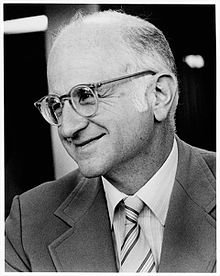 Robert S. Mendelsohn (1926 – 1988) was an American pediatrician and critic of medical paternalism. He denounced unnecessary and radical surgical procedures and dangerous medications, reminding his readers of public health failures such as the 1976 swine flu vaccine fiasco and the damage caused to daughters of women who took the drug Diethylstilbestrol during pregnancy.[1] He portrayed doctors as powerful priests of a primitive religion, with dishonesty as its central ethic. His mild manner appealed to the public, while his message infuriated his medical colleagues.[2]

Mendelsohn wrote a syndicated newspaper column called The People’s Doctor, and also produced a newsletter with the same name (the newsletter continued after his death until 1992, under the name The Doctor’s People.[3]) He published five books, including Confessions of a Medical Heretic,[4] Mal(e) Practice: How Doctors Manipulate Women,[5] and How to Raise a Healthy Child…In Spite of Your Doctor. He appeared on over 500 television and radio talk shows.

In Confessions, Mendelsohn argued that the methods of modern medicine were often more dangerous than the diseases they were designed to diagnose and treat. He advised consumers to be suspicious of their doctors. “One of the unwritten rules in Modern Medicine is always to write a prescription for a new drug quickly, before all its side effects have come to the surface.” (Confessions of a Medical Heretic, p. 32